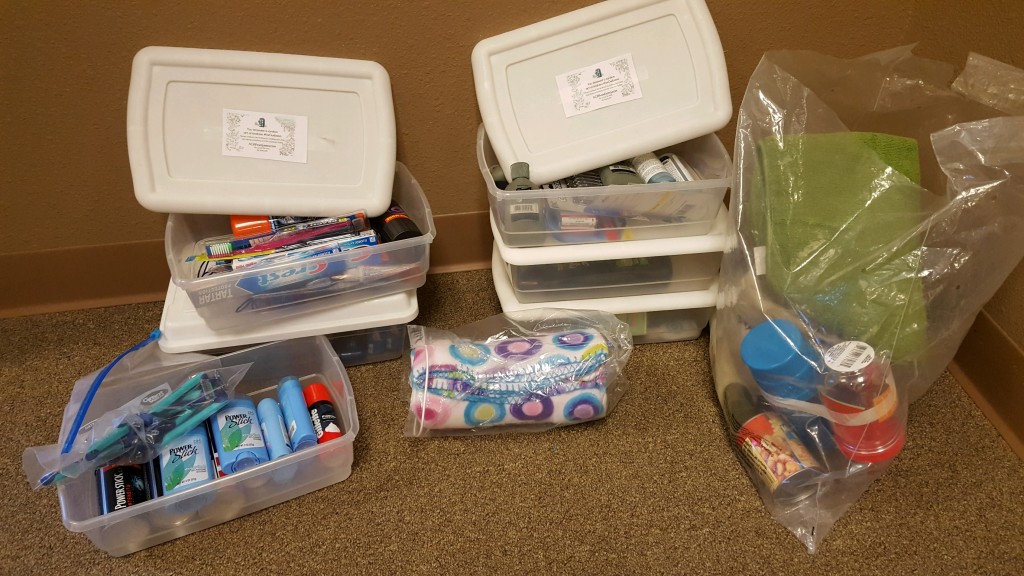 Having worked at Waterfront Rescue Mission for a little more than two months, I’m continually reminded of why I got out of radio. Sure, it’s fun being on the air, have people listen to you, recognize you, praise you, and generally feed your ego. But feeding ego isn’t why God placed each of us into these bodies we pilot around. It’s feeding souls. Other peoples’ souls. So I left, and joined something I believed in, and would not be about me and my ego.

The reminder I mentioned? This morning I was sitting at my cubicle writing an email to a local church to see if they’d like to volunteer at the Mission when our volunteer assistant, Debbie, rang back to let me know we’d had some boxes of toiletries donated. It’s always a difficult sell to people that we need deodorant and toothbrushes, many would rather donate food or elbow grease (which we also really need), but God always provides through the generosity of his followers. Usually we get donations from a church that ran a collection, perhaps a store that had some surplus goods, or maybe a school group looking to make good on their community service hours. Today, there was a different impetus behind the dropoff.

I took pictures of the supplies as I always do and took them over to the Day Resource Center to be distributed to our guests. There were some blankets and sippy cups that were particularly well received by a family with 7 children who were living out of their car. I came back to the office and Debbie mentioned that the supplies were donated by a couple of ladies who were giving on behalf of A Gift From Emma. We get many groups that donate, but this was a new one to me. Since someone was kind enough to donate, I figured I’d hop on the computer and do a little research.

Having read Emma’s story, it seems she lived more in her 15 years than most of us will in 80 or 90. It was then that I’d realized old feelings had crept back in like they had in the radio days, that I was happy to have people recognize me for what I was doing, go on the radio or get interviewed by a newspaper and generate publicity… that I was making it a bit about me again. I wish I didn’t need reminders about what really matters, that we need to get our hands dirty, hold on loosely to the trinkets of the world, and get thrilled by giving rather than acquiring.

Thank you, Emma, for your example. If everyone in this world were an Emma, I’d be out of a job, as would every Mission on the planet. And I can’t imagine a better scenario other than Heaven itself.

The Story of “The Flower Girls:” #itallchangedwhen My role models have taught me how powerful kindness is and how far a little kindness can go, so when I became the role models of my little sister and her friend, I made them my priority. I became determined to be that positive role model they needed. END_OF_DOCUMENT_TOKEN_TO_BE_REPLACED

Hi there! I am a customer of yours and was truly touched by your story…and so very sorry for your loss. I am a 5th grade teacher in Rockaway, New Jersey and this is my 26th year of teaching. I always try to instill and inspire my students to always give back to others, to END_OF_DOCUMENT_TOKEN_TO_BE_REPLACED

We were on our way to NY on the train when a young mother with 2 boys – under 3 years of age – boarded. She was trying hard to get her family to Chicago from Ft Worth , TX . The kids were acting up bad. So I did all I could to help END_OF_DOCUMENT_TOKEN_TO_BE_REPLACED

When we got back from holiday break in January there was a kid missing from my English class for 2 weeks and when I asked I found out his family was in Arkansas with his grandmother who had been diagnosed with cancer. For our January Emma service we found the address and put together a END_OF_DOCUMENT_TOKEN_TO_BE_REPLACED

So today, was push mobile day, an annual cub scout activity that the boys have to push this wooden car with a friend sitting on it. Because of some new rules, one of the boys from my son’s group that had arrived late couldn’t participate in the races. He got pretty sad. When they announced END_OF_DOCUMENT_TOKEN_TO_BE_REPLACED

I live near the state of New Mexico, but I live in Arizona. I heard about a young dog that is in the municipal shelter in New Mexico needing a home. I am trying to find this girl a forever family (she has had 3 in 6 months…) that will provide her unconditional love and END_OF_DOCUMENT_TOKEN_TO_BE_REPLACED